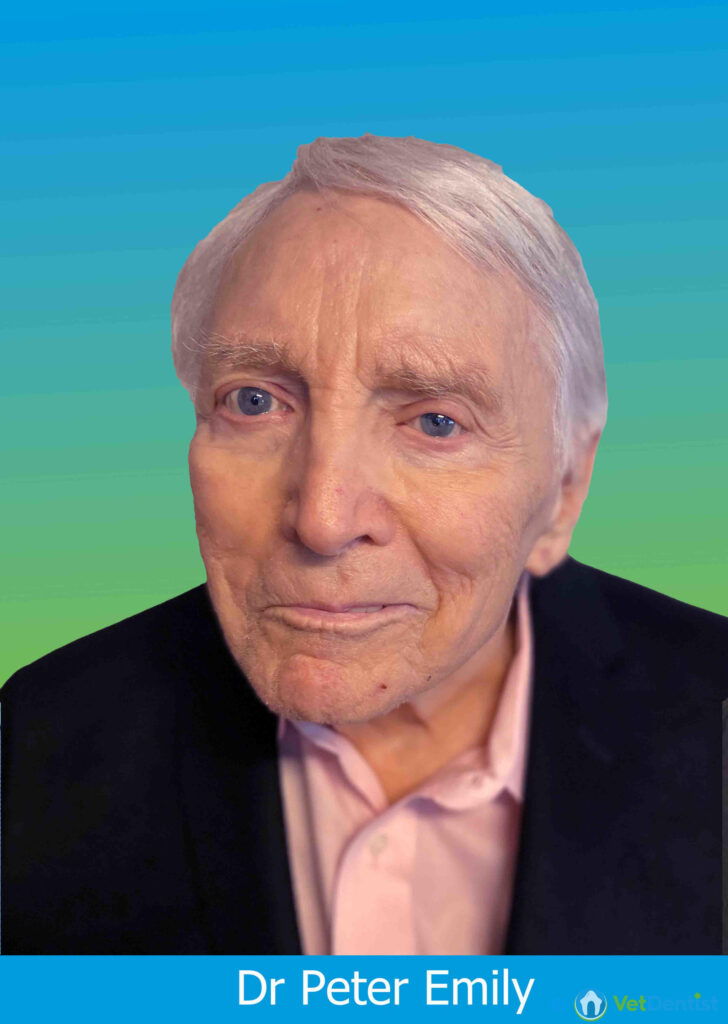 Dr. Emily is an accomplished human and veterinary dentist with a career spanning over 50 years. He received his Doctor of Dental Surgery at Creighton University, Omaha Nebraska and his Certificate of Periodontology from the University of Pennsylvania. Dr. Emily later went on to receive his post-graduate certification in Pediatric Dentistry, Endodontics, Oral Surgery and Restorative/Prosthetic Dentistry from the Dental Division of Denver General Hospital. Dr. Emily is an Honorary Diplomate of the American Veterinary Dental College and the Academy of Veterinary Dentistry. He has previously held the position of Faculty Affiliate of Animal Dentistry at Colorado State University, School of Veterinary Medicine, is a past Dental Faculty Affiliate at the University of Missouri at Columbia, and has worked as Director of Exotic Animal Dentistry at the Denver Zoological Gardens. Dr. Emily has also worked extensively on the biomechanics of movement and kinesiology. Dr. Emily is past president of the American Veterinary Dental Society (AVDS). When the AVDS wanted to become a board specialty, Dr. Emily was one of four – himself and three veterinarians – who approached the specialty board to understand the requirements for board recognition. Dr. Emily was one of three – with two veterinarians – who developed and administered the initial Academy of Veterinary Dentistry entrance exams. Later, the three veterinarians and Dr. Emily developed and administered a 3-part exam process for acceptance into the College of Veterinary Dentistry, and this same 3-part format is still used today. For years he helped the animals of Siegfried and Roy. The Denver Zoo has also called upon Dr. Emily to perform repairs on the beak on hornbills and toucans, as well as caring for kangaroos, wild dogs, polar bears, grizzlies and orangutans, to name but a few of the many species on which Dr. Emily works. In the early days, many zoos did not have the proper facilities for working on exotic animals, so improvisation was key. For example, at the Denver Zoo, Dr. Emily improvised, using the hydraulic lift of a pickup truck to perform a surgical root canal on a polar bear. Dr. Emily has written and presented extensively including author and co-authorship of three veterinary dental textbooks and multiple dental publications and manuscripts. He has lectured extensively on all phases of animal dentistry for over 20 years to veterinary groups and dog clubs throughout the USA, Europe, Australia, New Zealand, China, Brasil and Japan. In addition, he has conducted extensive research and development of veterinary dental medicaments and oral health aids.